What to you get when you combine Cuban music with funky beats? There is only one word that comes to mind, PALO!!! Voted the number one band in Miami in the New Time’s reader poll, their music is a mix of Afro-Cuban-Funk. 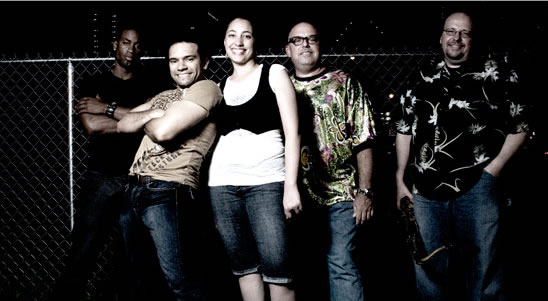 In 2003 Steve Roitstein had this idea, to combine Cuban music with funk beats, so he invited Leslie Cartaya, Philbert Armenteros, Ed Calle, and Raymer Olalde to join him in a little experiment. Little did he know that this would be one of the hottest groups to ever hit the South Florida music scene in years. With Steve on keyboards, and Leslie doing vocals, they also have Ed Calle, on sax, Raymer , a Timbalero, on percussions, and Philbert, a specialist in Yoruba music, also a vocalist, percussionist, and composer.
Steve Roitstein, is no stranger to the music business, he has been in the industry for many years, working with artist such as Celia Cruz, and Willy Chirino. He’s a song writer, composer and musical arranger. Owner of Riot Music , a music production company, he’s received many awards. He is also an educator, Associate Professor of Music Business at Miami-Dade College.

So the experiment began in a local club in Miami and has now taken over. Along with playing local venues,such as Art in The Park, The Miami Music Festival, and Carnaval on the Mile, PALO has packed the house in New York City legendary club, SOB’s, Villa Victoria Center for the Arts in Boston, and the Chicago Folk and Roots Festival.

Their first CD, “This is Afro-Cuban Funk”, available at www.gopalo.com and on various other sites such as iTunes, will get you out of your seat and dancing to the beat!! Their songs are all original and with the smooth and sassy vocals of Leslie Cartaya , PALO is the real thing. My favorite song off the CD is “Lengua Larga” which in Spanish means “long tongue”, but refers to a gossiper. Whether you speak or understand the language does not matter, because there are no borders or boundaries in music. Music is universal and the language of the heart. Besides their hot music, the one thing I admire most about this group is the respect and admiration they have for each other, and it shines through in everything they create. Palo is presently working on their second CD and I can’t wait to get my hands on it. So listen to their songs, watch their videos and believe me you too will become a big fan of PALO. Enjoy the music!!